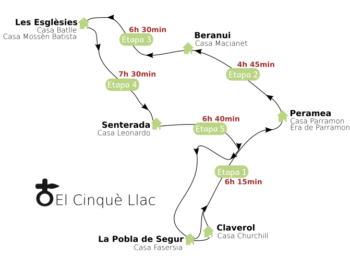 The Fifth Lake is a circular hiking trail in the Pyrenees, just 200 km from Barcelona, which begins and ends in La Pobla de Segur.

It is a mid-mountain route, accessible to all kinds of hiking enthusiasts, which takes in the counties of Pallars and L’Alta Ribagorça, at the foot of the Aigüestortes i Sant Maurici Natural Park, by way of an itinerary divided into five stages. :

For over 100 kilometres, hikers will conquer the changing terrain nature offers us, while enjoying one of the most unknown and most astounding areas of the Pyrenees: the Pla de Corts plain, the valleys of Vall Fosca and Vall de Manyanet, and discovering Montcortès lake, the Fifth Lake.

Glimpses of the Fifth Lake are caught from various peaks on the trail, as if it were a drop of water, until the final stage when hikers see it in its full glory.

One of the trail’s key values is that most of the itinerary follows bridle paths and mountain trails (62%), some especially retrieved for the occasion and others already marked out by the respective town councils. However, each stage has sections by track (26%) and road (12%). 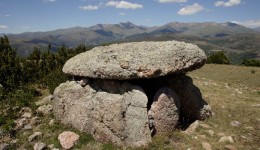 On the hike, we will discover that the area has been inhabited since prehistoric times until the present day. We will come upon dolmens, shrines, churches, fortified towns, monasteries, bridges and Romanesque ruins, huts, farmhouses and shepherd’s huts.
The latter are examples of dry stone architecture, a rich treasure in our history, as are the paths travelled, the shepherds’ paths.

The Magic of The Fifth Lake 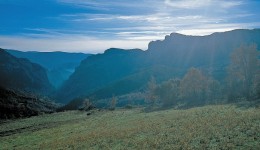 The Fifth Lake allows hikers to walk through a truly rural area, hitherto unheard-of but made fit for human use, where the villages hold on to their original character as well as their feasts and festivals, customs, legends and traditions.
Legends shall accompany us and shall lend a name to every day, legends that imbue our journey through the mountains with magic on the quest to discover the Fifth Lake. 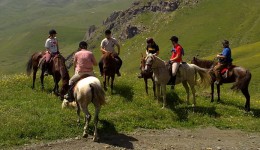 If hikers are in search of adventure, the setting offers the perfect terrain for following The Fifth Lake trail by mountain bike, on horseback and even astride a Catalan donkey.
There are a broad spectrum of outdoor pursuits supervised by qualified instructors that will get you started you and escort you to enjoy the activities in the utmost safety.

Cuisine is another highlight on the itinerary; it is a veritable pleasure for those with a predilection for good food.

Noteworthy regional dishes include girella (a type of haggis from Pallars stuffed with rice), palpís (grilled and stuffed leg of lamb), river trout, allioli de codony (quince aioli), organic beef from the Pyrenean brown cow and xisqueta lamb (a small but strong autochthonous breed), mostillo (made with must, flour and walnuts) and caramelised almonds.

You will savour high-quality food products such as charcuterie, especially the dry-cured sausages xolís and secallona, and exquisite cheeses such as tupí (fermented cheese aged in a clay pot) and brossat (a type of fresh cheese).

Cuisine that brings together the best products of our region, with local products and thousand-year-old recipes, capable of satisfying the most demanding palates.

All washed down with the regional wine, which bears the Costers del Segre designation of origin.
The route is marked throughout the 100-kilometre stretch with official Catalan Tourist Board signage, which includes a sticker for The Fifth Lake and the continuous yellow line.

Additional material to the signposts:

Recommended season
we recommend spring and autumn as the most suitable seasons for hiking The Fifth Lake trail, both on account of the temperature and the landscape, though the mild Mediterranean climate allows for trekking all year round in moderate winters and summers.

In this region, a temperate Mediterranean climate prevails, without a harsh winter marked by low temperatures. There is highly variable rainfall according to the season, which is most pronounced in spring and autumn.
The average temperature is 15ºC: 6ºC in winter and 23ºC in summer.